A fuel pressure regulator is a device that is used to control the upper limit of the fuel pressure. Controlling this pressure is needed so that the fuel injectors can receive and dispense fuel at a known rate. It is important to also understand that any externally mounted mechanical regulator will require some type of return line/bypass to the fuel tank.

To understand why certain types of mechanical regulators are used, a bit of fuel injector discussion is needed.

At idle most mild engines make approximately 16inHg of vacuum. To convert to pounds per square inch (approximate), divide this number by two. Hence, at idle the engine makes 8psi vacuum. In the manifold at idle the engine is trying to suck fuel out of the injector at 8psi vacuum. If your base fuel pressure is 42psi, and the engine is applying 8psi of vacuum/suction, then the effective fuel pressure at the injector outlet is 42 + 8 = 50psi.

Traditionally this change is done mechanically using a regulator that is manifold referenced. For this to work a vacuum hose is attached to the mechanical regulator so that the vacuum/pressure acting on the regulator diaphragm and the mechanical spring can act together to change the fuel pressure at a 1:1 ratio to manifold pressure.

The mechanical fuel pressure regulator is a reliable method to regulate fuel pressure. They come in a variety of different designs, both for OE and aftermarket requirements. A 4th-gen Camaro regulator is shown in Photo 1.

A typical aftermarket manifold referenced fuel pressure regulator is shown in Figure 1. This type is labeled for use in a full-bypass system. 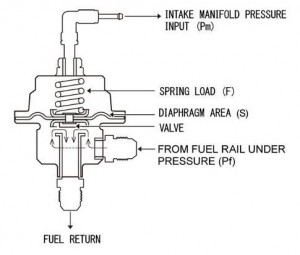 For many applications the fuel pressure regulator is not connected to manifold vacuum. Instead, the engine calibration is tuned to accommodate a near constant/static change in fuel pressure. As mentioned above, this is the type of system used in the C5 Corvette.

The C5 uses a device that provides both fuel filtering and pressure regulation. Often referred to as the C5 FFR, this part has become very popular in EFI conversions since it is easy to install, performs multiple functions, and is reasonably priced. The C5 FFR provides a 58psi at idle fuel pressure and an approximate 52psi at full flow. The C5 FFR is shown in Photo 2. 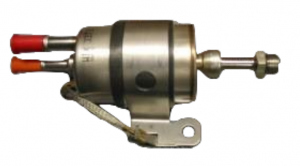 Photo 2. The C5 Corvette Fuel Filter Regulator. The inlet and return are on the left, the regulated pressure outlet on the right.

It is normal for a non-manifold referenced pressure regulator to drop pressure in order to obtain full fuel flow. The 4th-generation Camaro regulator above will drop fuel pressure to 50-52psi before full fuel flow is obtained when the vacuum referenced line is not attached. This pressure drop can usually be accommodated in the ECM tune if the injectors are sized appropriately. Forced induction may require a fuel pressure increase in order to keep the pressure across the fuel injector high enough so that sufficient fuel flow can occur.