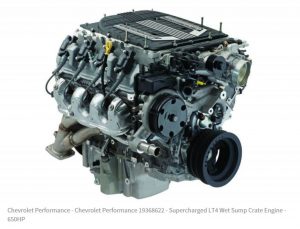 The two most popular are the naturally aspirated LT1 and the supercharged LT4.

The new LT5 has just arrived, and we’ll wait to see what GM recommends for fueling before diving too far in.

UPDATE! VaporWorx now has a new controller to handle the increased fuel demand for modified LT4 and stock+ LT5! Click here to view it.

The first thing to remember about these new direct injection (DI) engines is that they are no more difficult to feed fuel to than an LSx/Gen4 engine. The part that throws some folks off is that GM refers to the High Pressure Fuel and the Low Pressure Fuel systems.

The high pressure pump is 2000+ psi, far higher than an electric fuel pump can supply. However, the high pressure mechanical pump needs to fill with fuel from the tank, quickly, in order to pump fuel to the DI’s. That’s the job of the low pressure fuel system.

In the OEM application, the low pressure fuel system is almost identical to the systems used in the LS based cars. From a practical standpoint, they are the same.

Typically there are going to be two electronic control types for the LT engines: GM, and all the others.

The GM engine controller has a built-in FSCM. It will control a single fuel module just like the OEM application. It will handle one fuel module well, but it does not have sufficient power capability support multiple fuel modules.

All of the aftermarket engine controllers do not have a built in FSCM. For these applications, a VaporWorx PWM system has shown to work well in single and dual fuel module applications with or without voltage boosters.

For flowrates, be wary of the instructions provided by GM. As of Oct. 20, 2018 their online instructions had the same flowrates listed for the LT1 and LT4, with the LT4 being incorrect.

UPDATE: GM has supplied the same pressure and flowrates for LT1, LT4, and LT5 engines.

Since the LT5 was supplied only in the C7 ZR1 there is no single fuel module that will supply enough fuel unless the C7 part is used. However, the C7 part is very tall, over 14″, and does not fit many chassis. In that light, dual Gen5/6 fuel modules will provide sufficient gasoline or E85 fuel to meet the LT5 demand. If having long-term OE reliability, returnless, no external filters, etc. is the goal for the car, then dual Gen5/6 ZL1 fuel modules are highly suggested.

Let’s do some math…

A naturally aspirated engine needs approximately 1/2lb of fuel to make one horsepower for an hour.  The 1/2lb per hour per horsepower is called the Brake Specific Fuel Consumption (BSFC). We’ll leave the units conversion out of the following:

The GM fueling specification for the LT1 is 45gph. Okay!! That makes for a nice 17% safety factor.

The LT4 on the other hand makes 650hp, but the BSFC on supercharged engines is typically higher at 0.6

The GM fueling specification for the LT4 is the same as the LT1 at 45gph.

Hence, for the LT4, a pump with an output of 65gal/hr should be the minimum.

The GM fueling specification for the LT5 is the same as the LT1 at 45gph.

This is not the first time GM specified the incorrect fuel specifications for their crate engines. The LSA had two incorrect versions before finally coming out with the correct, but difficult to perform, fueling specifications.

For the LT1 and stock LT4 engines, the Gen5 and Gen6 Camaro ZL1 or CTS-V3 fuel modules will work well. The Gen6 Camaro and CTS-V3 are the same part.

The pumping sections of the Gen5 and Gen6 Camaro are identical with the same flowrates, so choose the pump that suits the chassis best.

For most all applications, the Gen5 ZL1 fits best and has fewer changes necessary to make work properly. ACDELCO MU2101 or M10081 are good choices.

For LT1 up to 750HP naturally aspirated, the ZL1 pump should work well.

For stock LT4, the ZL1 module should work well. It’s what came in the OEM application.

So the question becomes, what to do?

If a true fuel module, like the GM ZL1 is desired, then two options may be considered:

1) Twin fuel modules has shown to work well. However, the GM FSCM alone likely is not going to work. It will become overloaded. VaporWorx has a dual fuel module controller for these needs. This is especially true if E85 is used. E85 requires 30% more flowrate than gasoline.

2) A voltage booster. However, the input voltage to the GM FSCM is typically limited to approximately 16.5v or else the system will throw malfunction indicator codes. The VaporWorx fuel module controller can accept up to 22v with no issues. A rough estimate is that for every volt of change, there is a corresponding 15% change in pump performance up to approximately 18v.

For each of the GM engine control systems, there are some parts that are needed for a complete installation when using the ZL1 module.

First, the kit does not come with the fuel module electrical plug. This plug is unique and does not fit anything else on the car except remote fuel level sensors.

The other is a way to adapt the fuel pressure sensor into the fuel line. VaporWorx has several option to make these swaps easier, available in our LT Engine Installation Parts section.

You can also click here to return to our product walkthroughs & guides, or check out our product lines.