This article is part 4 of an informational series: Fuel Delivery Systems – An Understanding (click for Navigation)

Controlling this pressure is needed so that the fuel injectors can receive and dispense fuel at a known rate.

To understand why certain types of mechanical regulators are used, a bit of fuel injector discussion is needed.

At idle, most mild engines make approximately 16inHg of vacuum.

To convert to pounds per square inch (approximate), divide this number by two. Hence, at idle the engine makes 8psi vacuum.

In the manifold at idle, the engine is trying to suck fuel out of the injector at 8psi vacuum.

If your base fuel pressure is 42psi, and the engine is applying 8psi of vacuum/suction, then the effective fuel pressure at the injector outlet is 42 + 8 = 50psi. This is often termed as “pressure delta”, delta being the change across the injector.

As engine load increases, so does the fuel demand and manifold pressure.

If manifold pressure increases to 4inHg/2psi, then the fuel pressure at the injector outlet is now 42 + 2 = 44psi.

From a tuning standpoint, it is sometimes preferable to have the pressure delta at the injector outlet be constant. The primary way to do this is to have a rising rate fuel pressure so that a ratio of 1:1 of manifold pressure vs. fuel pressure change is obtained.

Traditionally, this change is done mechanically using a regulator that is manifold referenced.

For this to work, a vacuum hose is attached to the mechanical regulator so that the vacuum/pressure acting on the regulator diaphragm and the mechanical spring can act together to change the fuel pressure at a 1:1 ratio to manifold pressure.

The 1:1 manifold referenced fuel pressure allows the injector pressure delta to remain the same throughout the operational range of the engine.

It is not uncommon to find non-manifold referenced OE fuel systems, with the C5 Corvette being one of the most popular.

The C5 has one of the most popular fuel filter/pressure regulator devices used by hot-rodders today. It will be discussed later in this section.

They come in a variety of different designs, both for OE and aftermarket requirements. A 4th-gen Camaro regulator is shown in Photo 1.

A typical aftermarket manifold referenced fuel pressure regulator is shown in Figure 1. This type is labeled for use in a full-bypass system. 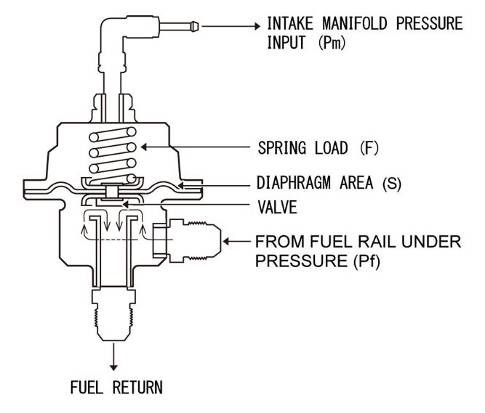 For many applications, the fuel pressure regulator is not connected to manifold vacuum. This is very popular in naturally aspirated engines.

Instead, the engine calibration is tuned to accommodate a near constant/static change in fuel pressure. As mentioned above, this is the type of system used in the C5 Corvette.

The C5 uses a device that provides both fuel filtering and pressure regulation. Often referred to as the C5 FFR, this part has become very popular in EFI conversions since it is easy to install, performs multiple functions, and is reasonably priced.

The C5 FFR provides a 58psi at idle fuel pressure and an approximate 52psi at full flow. The C5 FFR is shown in Photo 2. 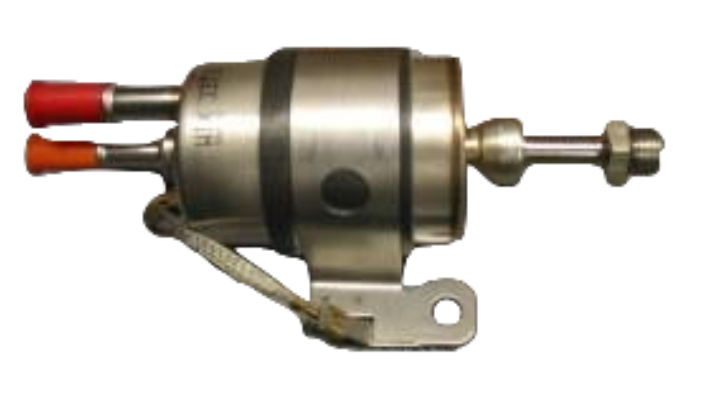 Photo 2. The C5 Corvette Fuel Filter Regulator (FFR). The inlet and return are on the left, the regulated pressure outlet on the right.

It is normal for a non-manifold referenced pressure regulator to drop pressure in order to obtain full fuel flow. The 4th-generation Camaro regulator above will drop fuel pressure to 50-52psi before full fuel flow is obtained when the vacuum referenced line is not attached. This pressure drop can usually be accommodated in the ECM tune if the injectors are sized appropriately.

Forced induction may require a fuel pressure increase in order to keep the pressure across the fuel injector high enough so that sufficient fuel flow can occur. It is very popular to run supercharged applications with a 1:1 manifold referenced fuel pressure.

Manifold referencing the fuel pressure may also be advantageous when a very large injector is used.

When a very large injector combined with high idle fuel pressure (60+ psi) is used, tuning the injector for good idle qualities may be difficult since the duty cycle cannot be lowered enough to adequately reduce the amount of fuel being dispensed.

A fuel injector must fully open and close to function properly.

If a very large injector is used along with a high fuel pressure, the duty cycle of the injector may not be reduced enough to allow the injector to fully cycle. This makes for a poor idle quality.

By using a manifold referenced fuel system a lower at-idle fuel pressure can be used to lower the idle fuel needs, and the pressure increased for full-power fuel demand.

For modern returnless systems, effectively there is just a single fuel line going to the fuel rail or mechanical engine driven fuel pump. The fuel pump or module will have a check valve to keep the fuel lines full and under some pressure in order to reduce engine crank times during startup.

Imagine driving your car on a hot day, and make a brief stop to get a sandwich. You go back out to start the car, but it won’t. What has happened is the fuel line pressure has increased due to heat soak from the engine, exhaust, etc. It is common in these cases for the fuel line pressure to exceed 150-200psi. Once over about 100psi at key-off, the port fuel injectors cannot overcome this pressure and will not function. Hence, the car won’t start due to excessive fuel pressure. On Direct Injected (DI) engines with mechanical pumps this is typically not a problem, but having excessive fuel pressure on lines and fittings is not a safe condition. Hence, a safety overpressure regulator is built in to the OEM fuel modules. In the case of most OE fuel modules, this pressure is in the 75-90psi range.

For applications when returnless PWM is used for stand-alone pumps such as the Walbro 450lph, 525lph, etc. an external inline safely overpressure regulator should be used. An inexpensive method is to use a Radium Engineering fuel pressure regulator body, P/N 20-0014 with no top, and an 85psi pressure regulator available from VaporWorx. The basic plumbing layout is below. Note that the regulator can be used inline or on a “T”. 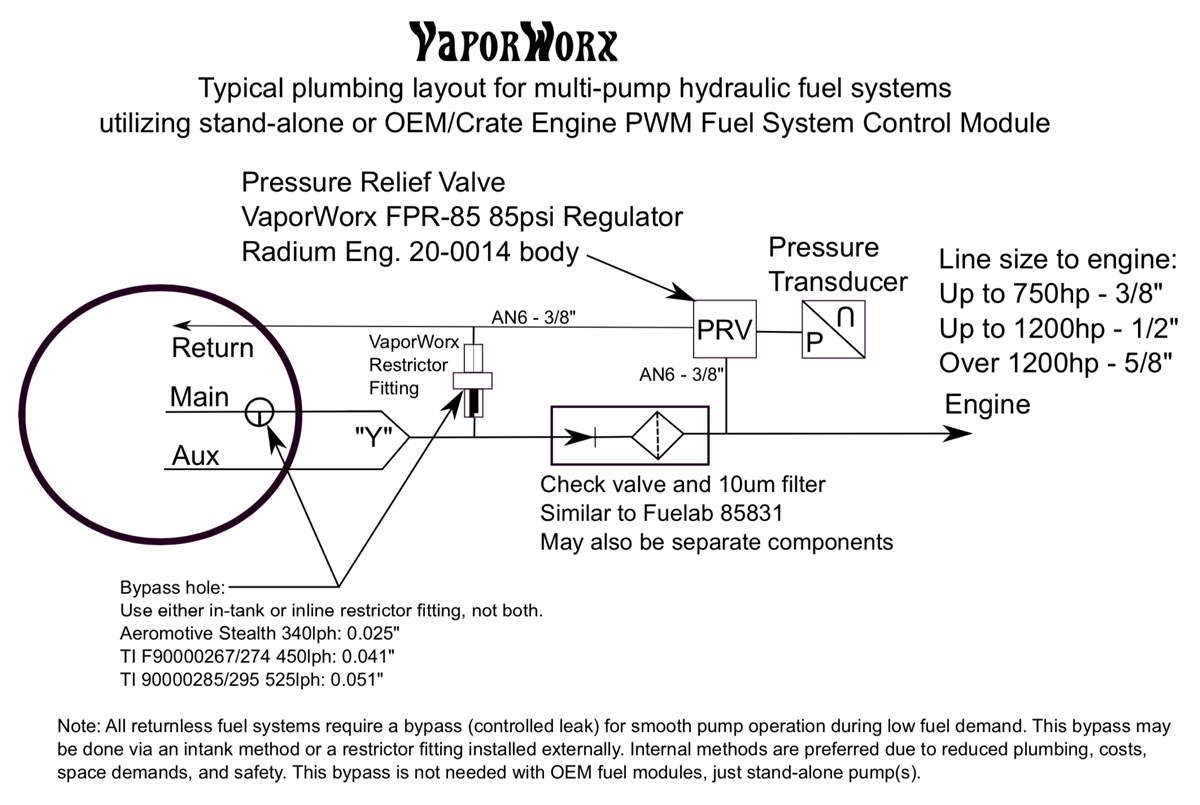 This article is part 4 of the 10-part informational series: Fuel Delivery Systems – An Understanding