This article is part 1 of an informational series: Fuel Delivery Systems – An Understanding (click for Navigation)

When carburetors were the primary means of metering fuel to the engine, the fuel delivery system was easy to understand:

The carburetor fuel bowls acts as a mini surge tank. Once fuel became available at the in-tank pickup, the carburetor bowls were re-filled, assuming the engine was still running. Most carburetors require approximately 6psi of fuel pressure to operate properly.

Modern Electronic Fuel Injection (EFI) is a more complicated system, but the basics are still the same:

The fuel must be transported from the tank to the fuel rail(s) on the engine intake manifold.

However, most TBI, Port Injection, and Direct Injection lift pump EFI systems require approximately 3-5bar (42-75psi) to operate properly. The fuel injectors need this high pressure to make a good spray pattern and to deliver the necessary amount of fuel to the engine.

Unlike the carbureted engine that uses vacuum to draw fuel from the fuel bowl, EFI requires that high-pressure fuel be available at all times. If at any time the fuel pressure falls too low the engine will run lean am may stop running. Therefore, a reliable means of delivering high-pressure fuel is needed to keep the engine running under all driving conditions, even when the fuel level is low and sloshing occurs.

The basic components needed in a modern EFI fuel system are:

In Diagram 1, the basic components are laid out similar to what they would be in a typical port injection EFI hot rod with the fuel pump mounted in the tank: 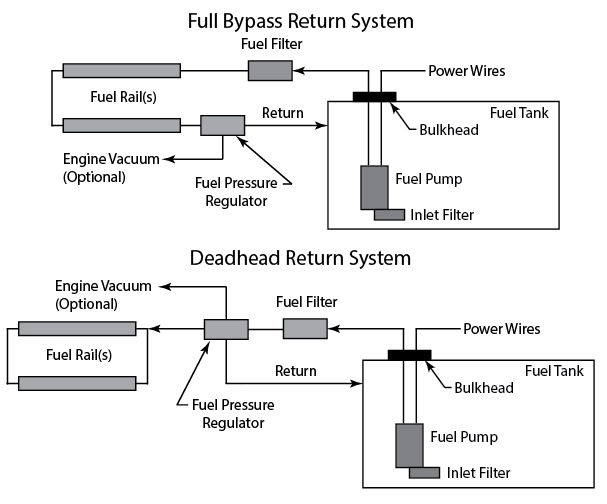 The full bypass system routes fuel through the engine fuel rail first before reaching the regulator.

In this arrangement the regulator is usually mounted in the engine compartment.

If the regulator was mounted in the rear of the car, then the fuel line and the fuel return line would both be pressurized.

Keeping the number of high-pressure lines to a minimum is a good safety measure. Fuel is also constantly flowing through the fuel rails. With fuel constantly flowing through the rails engine and engine compartment heat is absorbed and returned to the tank. The fuel tank is becoming a thermal battery and being charged with excess heat from the engine compartment.

For the deadhead return system, the fuel pressure regulator is usually mounted either in the engine compartment or near the fuel tank. In this arrangement, fuel does not continuously flow through the engine fuel rails.

For both of these systems, a return is needed to send the excess fuel back to the tank.

Depending on where the regulator is mounted, the return could be:

Many fuel modules have built in fuel pressure regulators, hence making them a single line to fuel rail type. Thought it is a single line, it is still a return type system. All mechanically regulated systems use some type of return.

Now, imagine driving your favorite EFI-equipped car with only ¼-tank of fuel around a corner:

The fuel sloshes to the side of the tank and uncovers the fuel pump inlet.

The fuel pressure instantly falls to zero, and the engine sputters and may eventually stop running.

If the car is driven aggressively, this can happen at much higher fuel levels. It is common for this condition to occur at 1/2 liquid level height in the tank.

What’s the use of having all that gas and not being able to use it reliably? Even the most inexpensive new cars will have better fuel delivery performance.

That is what VaporWorx is all about: Reliable fuel delivery under all driving conditions.

This article is part 1 of the 10-part informational series: Fuel Delivery Systems – An Understanding